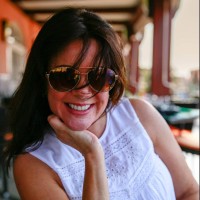 Don’t be mistaken, I may have had the worst thing happen to me but I am no withering daisy. This is the story about how I began traveling to honor my son and learned about the transformative power of travel. It is about the onward march for life and the willful rejection of misery.

Let’s Go On a Journey is named after my son It’s a saying he used to have. My journey began back in 2009 after I lost my son and my way in life. As a way to gain perspective and find my way back to “me”–the kid who grew up with wanderlust and a lust for life–I planned trips so I would have something to look forward to. First, they were small, I would find a seaside location, place a note in the bottle, and watch as the ocean consumed it. I imagined each year that  it would one day land on distant shores where he would like to go.

By the tender age of 16, he had visited several states in the U.S., careened down large snow-capped mountains, hiked up to ancient burial grounds in Hawaii and traveled down clay-red roads in Africa on his way to orphanages. Most of the time, I stayed firmly planted at home working my days away as a journalist and writing other people’s stories instead of my own.

Then one day I remembered the story that a young girl once told about how my son, Corey, would use his travels to transport her mind away from depression. His catch phrase was, “Let’s go on a journey.”

I was inspired to be bold, go on adventures and I did it–yikes–solo! That’s right, alone. But in my travels, I have found that I am never really alone because the people I’ve met on the way have carried me.

So, I hope to carry you, guide you to your next journey. Follow me as I prep, plan and pick my next destination. Follow me–from small trips to big adventures–let’s share our journey. I will talk about the funny stories on my travel, the messy ones, the sad one and the realistic side to staying safe. Come with me and, “Let’s go on a journey” together.

The first time I had heard the phrase, “Let’s go on a Journey,” it was at my son’s funeral. One of his friends was telling the story of my son’s wanderlust, where he wanted to travel and where he had longed to go. That story led me to my own journey.

I never knew it would take me to Bali. I had never read the book that created a cottage industry for forlorn females looking to refuel their soul. I had a magnetic pull toward the exotic, and this was on my list of placed to see. What better place to honor my son who was learning about Buddism before he died?

THIS BLOG IS FOR MY SON COREY AND TO EVERYONE WHO IS SEARCHING FOR THEIR BEST SELF. LET’S GO ON A JOURNEY.